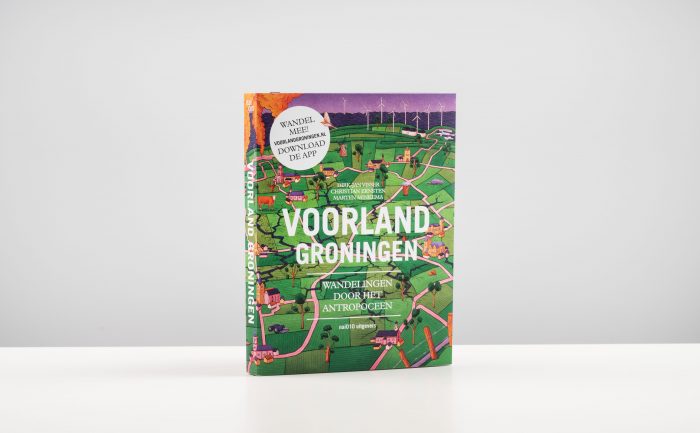 The Voorland Groningen project has so far been covered by the following media: RTV Noord, Dagblad van het Noorden, Opium NPO Radio 4, BLAD voor Noord-Groningen, the VPRO Gids and Financieel Dagblad. Please find below some photos of the books interior. 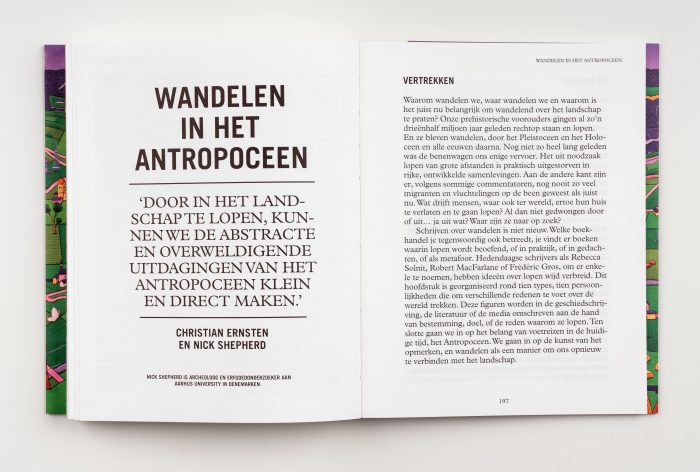 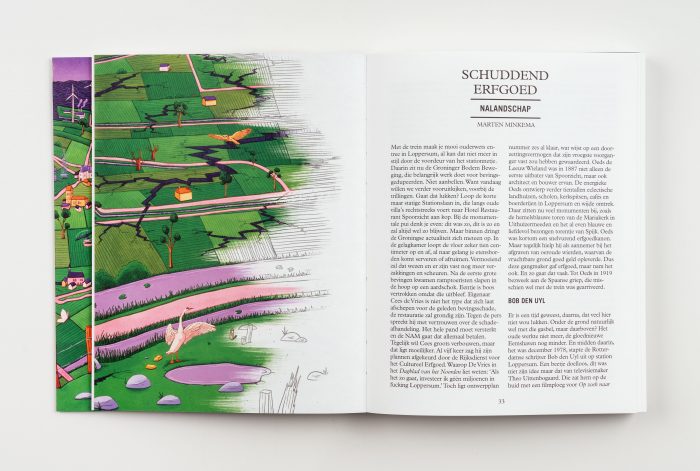 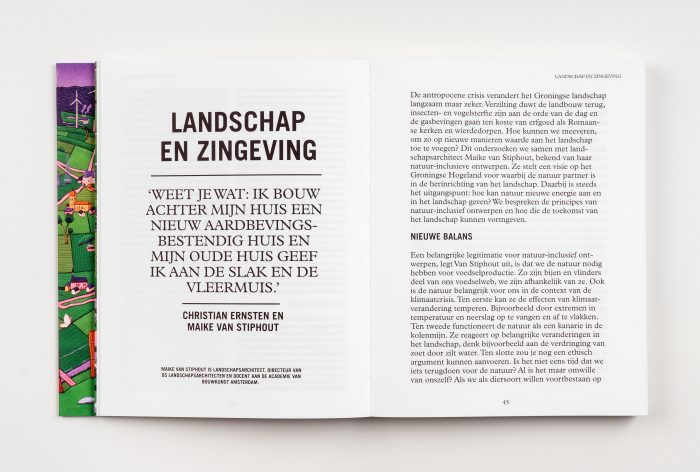 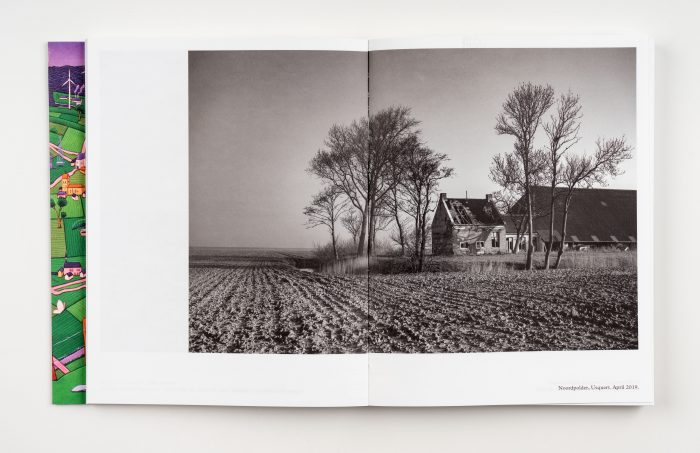 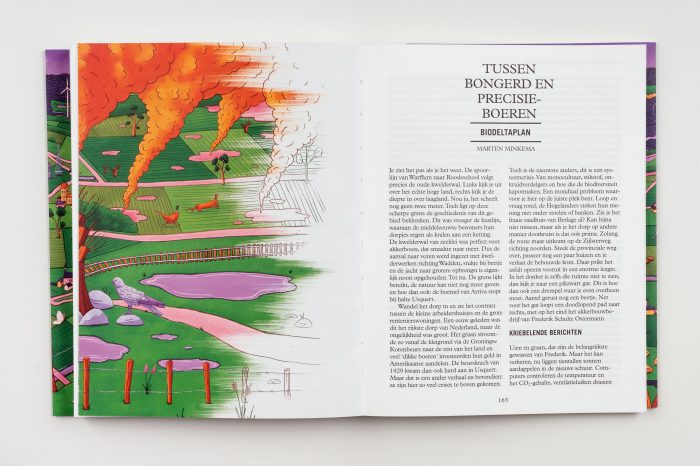 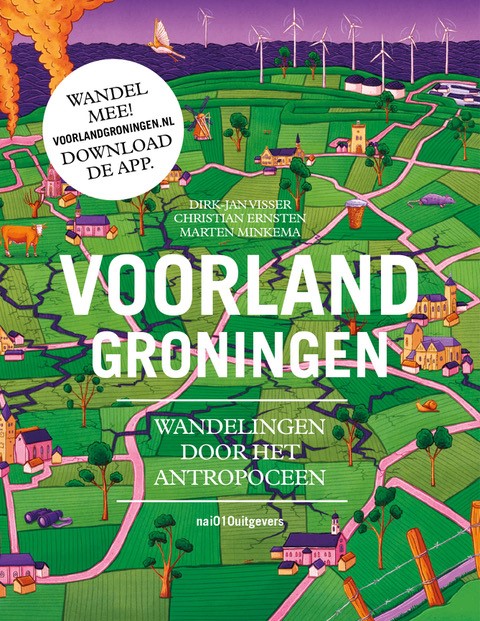 In the book Voorland Groningen. Wandelingen door het Antropoceen published by nai010 publishers in Rotterdam, I collaborate with journalist Marten Minkema and photographer Dirk-Jan Visser presenting four walks through the Groningen landscape. These walks, surrounding the villages of Hornhuizen, Loppersum, Usquert and the Eemshaven harbour, address four urgent themes in the antropocene landscape locally and globally: water, biodiversity, climate and heritage. The publication directed at a broad audience interested in landscape history, landscape architecture, urban design and ecology, builds on the research I did into walking as a research method and into emergent Anthropocene landscapes.

You can order the book at nai010 but you can also download the walking app and make the walks themselves with an audio tour. Or, you can also listen to the radio. On four Sundays starting June 21 four short radio documentaries made by Marten Minkema concerning the walks will be broadcasted by Radio DOC NPO Radio 1.

On 22 May 2019, during the colloquium of the Arts, Media and Culture research group of Maastricht University’s Faculty of Arts and Social Sciences, I led a Meuse excursion. During the walk, which took place in a rewilded section of the river near Borgharen, we did an ethnographic exploration of sorts at the Grensmaas or Border Meuse.

This “most natural” part of the Meuse, just 5km north of Maastricht, became an important source of inspiration for the revitalization of rivers in the Netherlands. While we traversed the newly designed wilderness I invited participants to join me on a double journey. One was to explore notions such as wild and wilderness vis-a-vis the rogue, fleeting or broken natures of the Meuse; the other was to walk as a way of rewilding the historical imagination of the river. How can the Meuse walk allow for an undisciplined understanding of the river’s past and present? 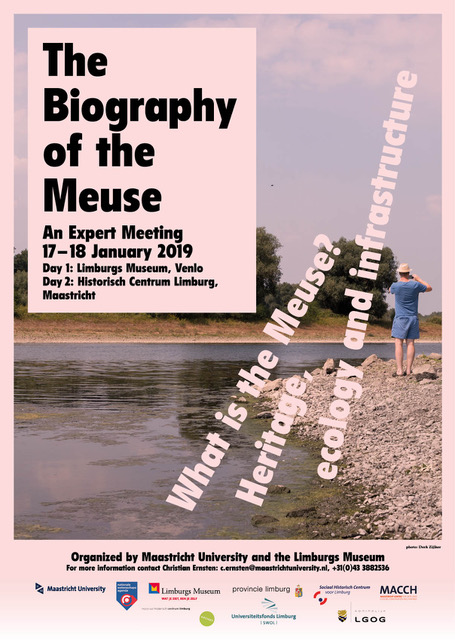 Biography of the Meuse

Climate change, water management, and heritage, these are issues that people around the globe feel passionately about. For the province of Limburg these issues are epitomized by its relation to the Meuse river. In response to the flooding in 1993 and again in 1995, the Maaswerken – the largest river engineering project in the Netherlands – fundamentally transformed the Meuse with regard to water safety, but also in terms of ecology and heritage.

Against this backdrop as well as an increasing scholarly interest in notions of ‘landscape biography’ and the Anthropocene, I organize in collaboration with Nico Randeraad and Benoit Mater a meeting in order to bring together researchers, professionals and artists who are dealing with and concerned about water and rivers, in particular the river Meuse.

The program is designed to inspire a dialogue about the Meuse as heritage, ecology and infrastructure. As an outcome of this expert meeting, they intend to make an inventory of relevant research collaborations and funding opportunities.

The program at the Limburgs Museum on Thursday morning 17 January 2018 is open for everybody. Download the programme in pdf version. E-tickets can be reserved through the LGOG website. 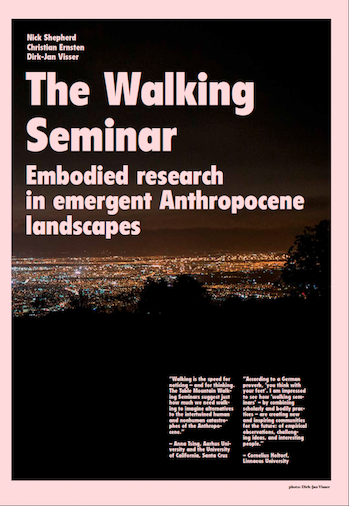 On 7 December 2018, during the workshop on the colonial legacy of Dutch natural history collections at ARTIS Amsterdam zoo, Nick Shepherd, Dirk-Jan Visser and I launched the publication The Walking Seminar. Embodied research in Anthropocene landscapes, published by ON AIR, Amsterdam University of Arts.

Prof. Hester Dibbits of the Reinwardt Academy presented the first copy of the  publication. The edited volume is the result of the Walking Seminars in 2014, 2016 and 2018 and includes work by a variety of scholars, writers, artists, and architects.

You can download a digital copy via this link. Hard copies can be pick up at the Reinwardt Academy, Maastricht University or Aarhus University. 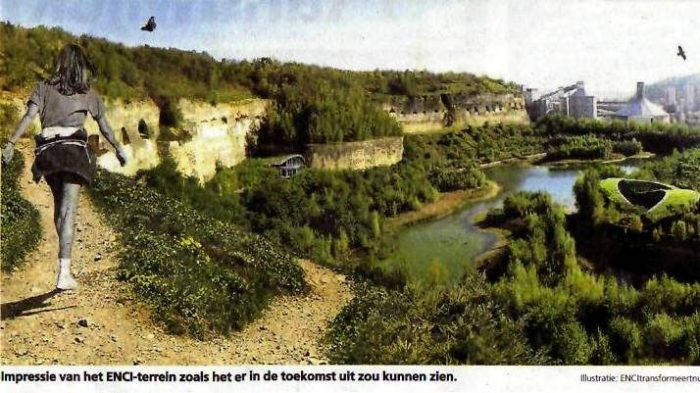 From 26 – 28 October 2019 the Contemporary and Historical Archaeology in Theory took place at Aarhus University. Here I presented on “Walking the Mount Saint Peter wilderness. The archives of an emerging Anthropocene landscape”.

This presentation was a first step into an examination of the emergence of different regimes of care surrounding the conservation of the new co-existence of animals, plants, humans, and technologies at the Mount Saint Peter. I’m interested in the genealogies of ideas concerning the conservation of nature and culture at this site. In particular, I intend to researching a subaltern perspective on the transition of a post-industrial landscape. In this presentation, I want to propose thinking through the Mount Saint Peter landscape, and, especially, the rewilding of the former cement quarry as an archive of an emerging Anthropocene landscape.

I will continue this research and report on this blog. 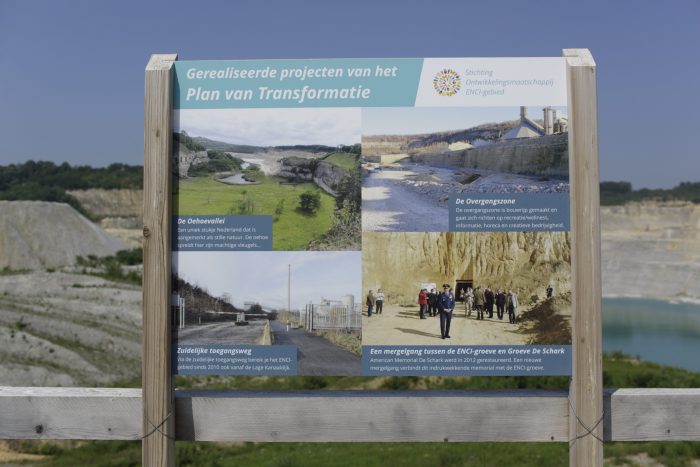 Ethnography of the ENCI quarry

On 6 June 2018 I walked the ENCI quarry at Mount St Pieter, near Maastricht, together with archaeologist Nick Shepherd and photographer Dirk-Jan Visser.

A first step into doing an ethnography project on the ENCI quarry’s transformation, a project that would keep close watch of the developments as they unfold. Starting in 2018-2019 with students involvement. 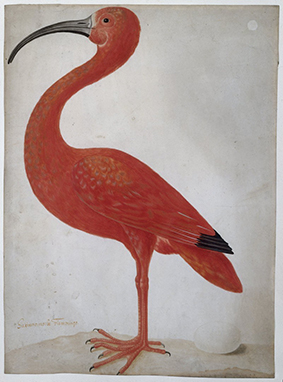 On 20 March I will participate as a panel member in Doing artistic research: A Collaboratory Symposium on artistic research practices organized by the Research Centre for Arts, Autonomy, and the Public Sphere of the Faculty of Arts, Zuyd Hogeschool. The initiative is focused on trying and think through a Maastricht graduate school for Artistic Research and also involves the Maastricht University and Van Eyck Academy. The event is organized in conjunction with my new employer’s Annual Conference, nameyly the Annual Conference of the Maastricht Centre for Arts and Culture, Conservation and Heritage (MACCH), which takes place on March 18th and 19th at Bonnefantenmusem Maastricht and Van Eyck Academy. 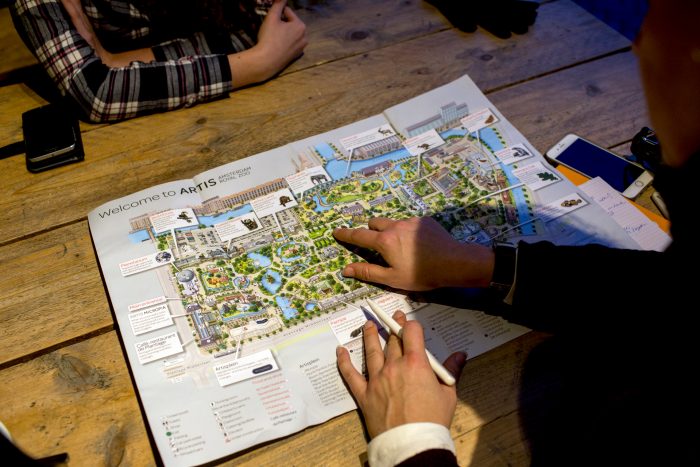 ARTIS in the Anthropocene

The Reinwardt Academy’s artist-in-residence archaeologist Nick Shepherd, dance animateur Nicola Visser, DAS Graduate School’s Rose Akras and I organized from 8 until 12 January 2018 the Winter School for the Reinwardt Academy’s Master of Museology program on ARTIS in the Anthropocene or the future of the zoo.  Please read more about the Winter School on the arist-in-residency project website Archaeology of Memory.

From January 2018 I function as an advisor to the The Hague – based art centre Stroom. As a member of Stroom’s “Cloud”, I will be involved in the process of envisioning their new programs and urgencies for the upcoming years. 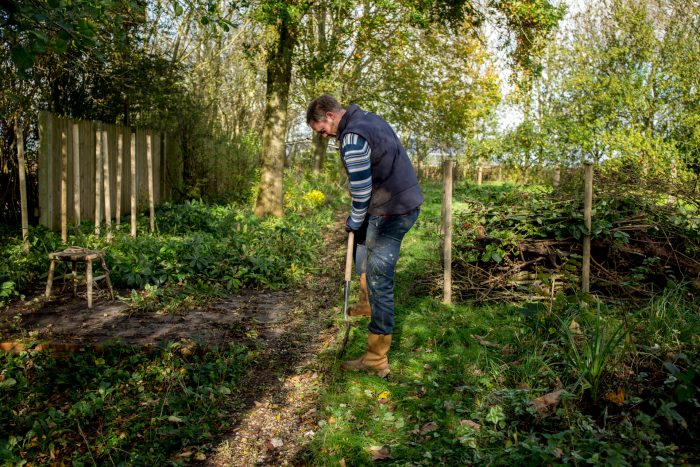 Gardening in a Post-Wild World

While reading the beautiful book Planting in a Post-Wild World by Thomas Rainer and Claudia West, I worked last week in the garden at the Atelier aan de Middendijk together with Dirk-Jan Visser and Arthur van Beek. Rainer and West suggest that in a post-wild world one can plan to design plant communities. Influenced by landscape architect Maike van Stiphout we also thought of gardening in a nature inclusive way – who could our client in the garden? The bees? The butterflies? Or the larks? Who are the refugees of our polder?

On 3 November, I will present a paper at a Conference on Historical Archaeology and Theory (CHAT). I will focus on A world of many worlds”. Decolonizing the archaeology of Cape Town’s District Six and District One. This year CHAT is organized by the Amsterdam School for Heritage and Material Culture and it takes place in Amsterdam. 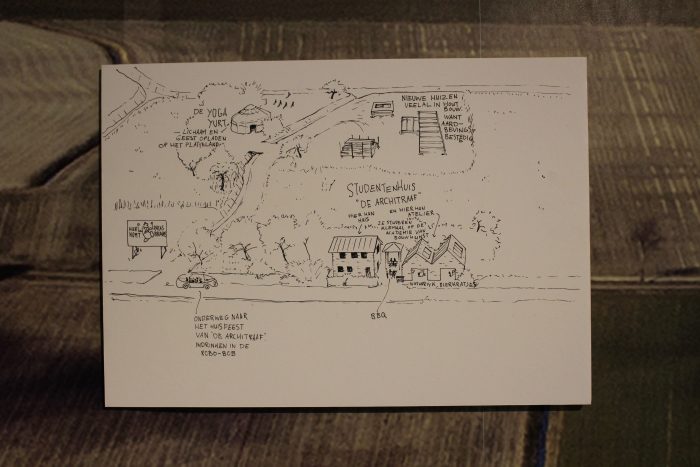 The Future is a Potato

Together with Edwin Gardner of Studio Monnik, Dirk-Jan Visser and I presented the “The Future is a Potato” exhibition at this year’s Potato Party in Hornhuizen. END_OF_DOCUMENT_TOKEN_TO_BE_REPLACED 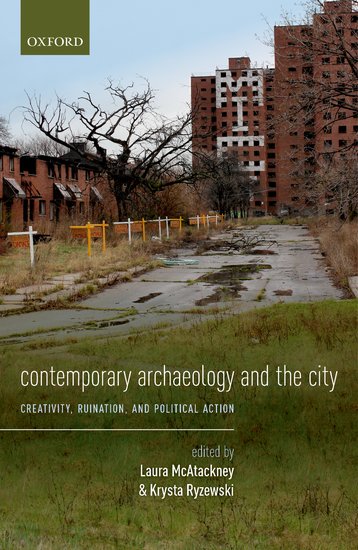 Contemporary Archaeology and the City

I contributed the essay “A Renaissance with Revenants: Images Gathered from the ruins of Cape Town’s Districts One and Six” to an edited volume by Laura McAtackney and Krysta Ryzewsky entitled Contempory Archaeology and the City. Creativity, Ruins and Political Action published by Oxford University Press.

END_OF_DOCUMENT_TOKEN_TO_BE_REPLACED 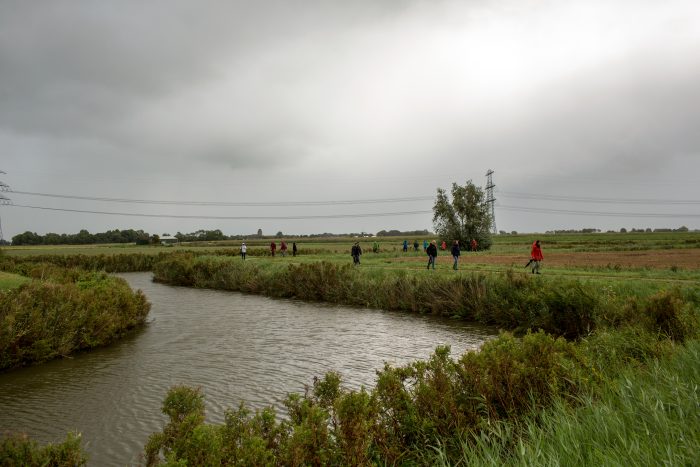 Movement and heritage in Groningen

Archaeologist Nick Shepherd, movement artist Nicola Visser and I contributed to the Reinwardt Academy Master introduction by organizing a day about walking, movement and Groningen heritage. Read more on the project website Archaeology of Memory. 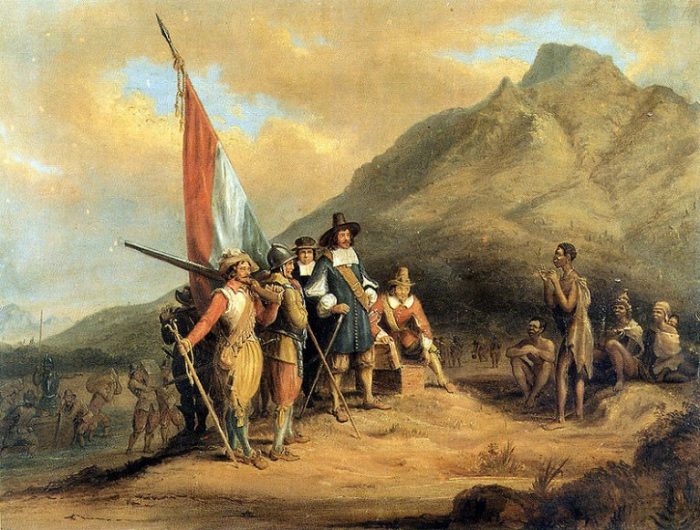 Platvorm VOER (Visies Op Erfgoed & Ruimte) published “Kaapstad in zes momenten”, a shortened and translated version of my article “Following the ancestors: Six moments in a genealogy of urban design and heritage in the city of Cape Town”. Click here to read the article in Dutch. 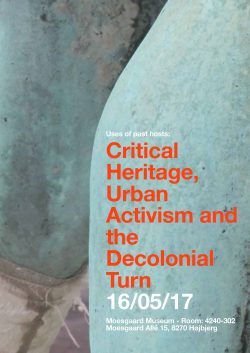 Uses of the Past

Next week, on 16 May, I will present a paper at a workshop of the Centre for Uses of the Past of Aarhus University entitled “Critical Heritage, Urban Activism and the Decolonial Turn” organised by Britta Timm Knudsen. I will focus a chapter that will be published this year in July in an Oxford University Press book edited by Laura McAtackney and Krysta Ryzewski and entitled Contemporary Archaeology and the City.

Please find here a direct link to the article last week in the Dutch daily newpaper NRC  as well its original English version. 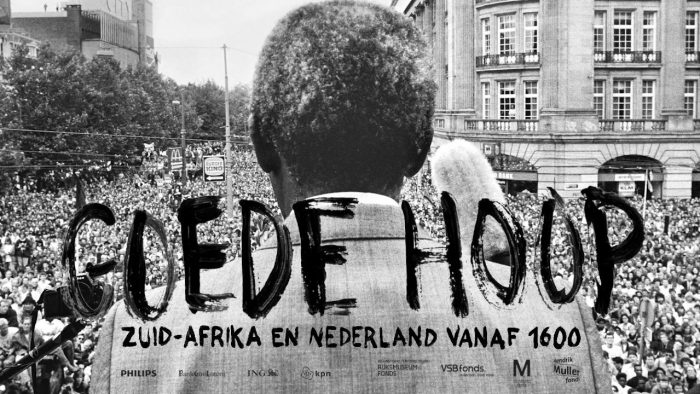 I co-authored with Nick Shepherd, Good Hope After #RhodesMustFall. A critique of published the Dutch daily NRC Handelsblad of the current Good Hope. South Africa and The Netherlands from 1600 exhibition at the Rijksmuseum. Image credit: Rijksmuseum. 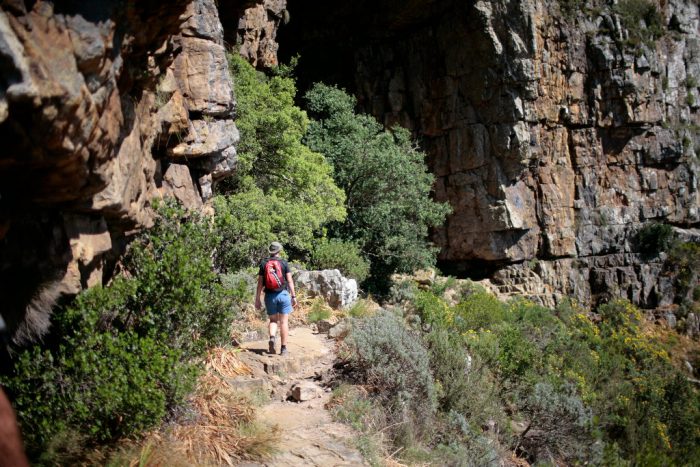 Christian Ernsten and Nick Shepherd initiated Archaeologies of Memory in March 2017 when Shepherd began a period as Artist in Residence at the Reinwardt Academy. Taking archaeology as practice, genealogy and trope, we walk through the troubled landscapes of colonial modernity. We are interested in notions of body as archive, landscape as archive, performance as archive. We are interested in what it means to think through the body, affect and senses.